A stroll through the Ventura County Fairgrounds at the recent swap meet yielded me several “treasures.” I put the word in quotes because the phrase, “one man’s trash is another man’s treasure” kept running through my head. At first I was overwhelmed with the vast amount of junk people had stuck price tags on. There were torn posters from bad forgotten movies, a puppy pepper shaker without its matching mate, old shoes and 8 track tapes galore. I was deliberating whether I should have spent my $10 on Venti Double Vanilla Latte rather than on admission when I saw something that really caught my eye.

There it was in all its goldenrod glory. An American tribute to Graphic Design and Illustration. An original Pee-Chee portfolio from the late 40’s or early 50’s. You know, those pocket folders everyone had in high school? Some of you may be too young to remember because they had gone out of fashion by the early 90’s, I think. Everyone carried their loose papers in them but mostly they provided relief from the boredom of droning teachers. Anyone? Anyone?  I scribbled song lyrics and poetry between the vertical rust-colored lines on the left side to pass time. Some people would attempt to recreate their favorite band logos (see this guy’s funny story). Some adjusted the action of the sports figures in inappropriate ways. Others just doodled.

So apparently they were a West Coast phenomenon and you may have no idea what I am talking about if you didn’t grow up out here or are too young to have actually had one of these great folders. The guys here in the office thought I was crazy going on and on about my terrific find. I explained that many designers got their start drawing on these during Poli Sci or Biology class attempting to make the outdated illustrations their own. In my research I read that the style of art was updated every ten years. Check out this link to see some great samples. 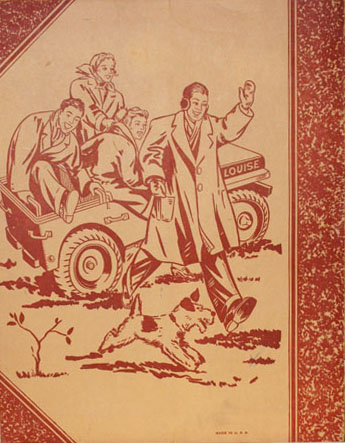 Now my particular folder find doesn’t have any of the familiar sports characters I grew up with. It has a more upscale feel to it with hipsters waving to a man getting out of a Piper Cub and two couples in overcoats climbing out of a Jeep named Louise. It doesn’t have a year or a price anywhere but it does have the obligatory “Useful Information” panel inside. In order to control the temptation to pull out the markers and start coloring it in, I am going to frame it and hang in the office. It really is an example of classic Mid-Century American  Graphic Design.

It just goes to show that there is a market for all that “trash” in Grandma’s attic. I found what is a super cool piece of history…to me and someone, somewhere is probably searching for that American Graffiti 8 track tape for the player hooked up in their garage. I wonder if the person with the puppy salt shaker found its mate at the Ventura Swap Meet that day.

So what kind of damage did you do to your Pee-Chee folders?